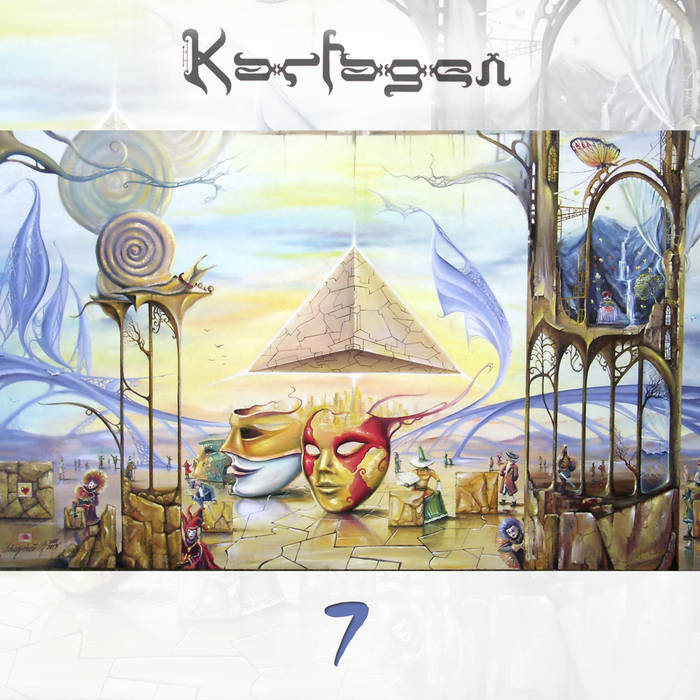 GREAT MELODIES. Melodies are the gold bar currency of Progressive Rock and there's enough of them in AKP’s latest offering to sink a battleship!

Remaining loyal to the gorgeous ethnic sound that is the bands trademark as ever Kalugin also stays true to his love of early CAMEL, FOCUS and THE ALAN PARSONS PROJECT to name just a few.

The seventh Karfagen chapter is a journey into myths and legends, a search for the truth within the figments of the imagination, everything and everywhere.

It concerns the mighty luck and inexplicable power of “7”. Things that impress folk so much that it can even become an obsession taking over there whole lives. WOW such power. “7”

Centered around the epic 28 minute monster track “Seven Gates” this is a journey you must get your ticket for and climb on board another MAGICAL CARPET ride from the great man and LONG MAY IT CONTINUE.

I was safely seated on that ride from the beginning, it was 4 months of the most exciting exhilarating musical experience I have been lucky enough to be involved in and thats saying something with the list of quality albums I have been privileged down the years to be on board with. SO CHECK OUT you lucky folks !

THE FLAME REMAINS ALIVE AND BURNING BRIGHT FOR OUR GENRE

Will - Caerllysi Music
The Seventh Karfagen chapter is a journey into the myths and
legends, a search for the truth within the figments of the
imagination, everything & everywhere. It concerns the mighty
luck and inexplicable power of “7”. Things that impress
folk so much, that it can even become an obsession taking
over there whole lives. WOW such power - 7
Centred on the epic track “Seven Gates” which was created during spring 2015.
It captures the direction to the entire albums mood. It`s the first time the
whole material for one of my albums was written just some 4 - 5 months before its
release date. As usual while finishing an album I have some demos, some ideas for
the future one. In case with “7” - all the previously composed demos I left for
the 8th Karfagen album “Omnitenna”, as the concept of the “7” captured me as well.
Talking about the sound of the album, I’ve done my best to create it with the
variety of being both dynamic and also allowing the music to breath. To recreate late
70`s prog “tone” that I still enjoy so much today.
Many thanks to all art rock fans, families, friends, storytellers, dreamers, painters,
musicians, critics, soldiers, teachers, preachers and lovers... Everyone who forms,
creates, explores, expands and inflates the life with harmony and meaning... AK

Bandcamp Daily  your guide to the world of Bandcamp

Featured sounds from Fly Lo and Ahmed Idris, plus Mother Nature hops on to drop off new project